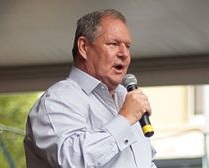 CoRBA’s position as stated in its submission to the Local Government Act review 2015, page 14 is:
“CoRBA recommends that a person should be restricted to not more than two consecutive terms as Lord Mayor. This is to curb the potential for a monopoly on the office, whereby a person effectively becomes ‘Lord Mayor for Life’.

Our proposal refers to two consecutive terms (8 years) – with an exclusion period of not less than two consecutive terms – but not precluding a person from standing again at the expiry of the exclusion period or seeking election as a councillor. So as to avoid a sham exclusion, the exclusion period should also include a former Lord Mayor becoming Deputy Lord Mayor.
We note that terms limits are a common feature of many political systems and that they promote more competitive elections, lessen the risk of developing a professional political class by ensuring ‘turn over’, and remove the risk of effectively ‘life-time’ appointments.”